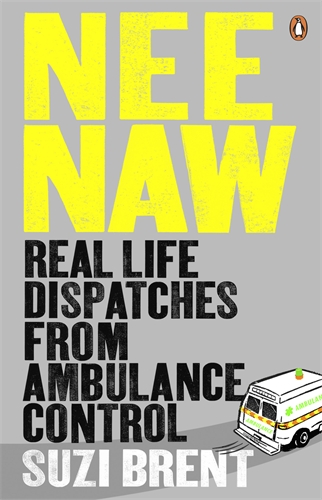 
When you dial 999 for an ambulance, Suzi's could be the voice you hear on the other end of the phone. Working in one of the country's busiest control rooms, it is her job to stay on the phone until the ambulance arrives, and to give instructions that could save your life.

From taking the first calls after the terrorist attacks on 7th July 2005, to delivering a baby over the phone, whether helping the child whose mum has attempted suicide, or dealing with the many regular callers - serial hoaxer The Banana Man, Sally the young alcoholic and Mad Brenda, each with their own surprising stories to tell - Suzi has heard it all.

Nee Naw will take you on a whirlwind tour of life in the emergency lane, introducing you to some unforgettable characters. Suzi Brent will make you laugh, she'll make you cry, but never again will you dial 999 for a broken finger...


Suzi: "Ambulance service, what's the problem?"
Caller: "I've eaten too much, and now I feel really sick. Can you die from eating too much?"