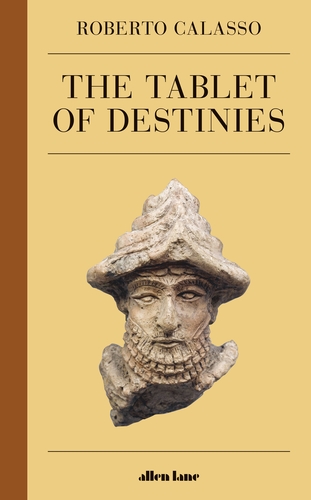 The Tablet of Destinies

'The Flood didn't come suddenly as a big surprise. It came at the end of a long, tormented story. Men just went on multiplying and the noise they made was ever more irksome . . . I remember days of desperation.'

A long time ago, the gods grew tired of humans and decided to send a flood to destroy them. But Ea, the god of fresh underground water, didn't agree. He advised one of his devotees, Utnapishtim, to build a quadrangular boat to house humans and animals, and saved these living creatures from the Flood.

Rather than punish Utnapishtim for his disobedience, Enlil, King of the gods, granted the mortal eternal life and banished him to the island of Dilmun. Thousands of years later, when Sinbad the Sailor is shipwrecked and arrives on that very same island, the two begin a conversation about courage, loss, salvation and sacrifice.

Following Calasso's masterful retelling of ancient Greek myths in The Marriage of Cadmus and Harmony and Indic myths in Ka, this richly imaginative work delves into the crucible of our collective consciousness to reimagine the origin stories of one of the earliest human civilizations.