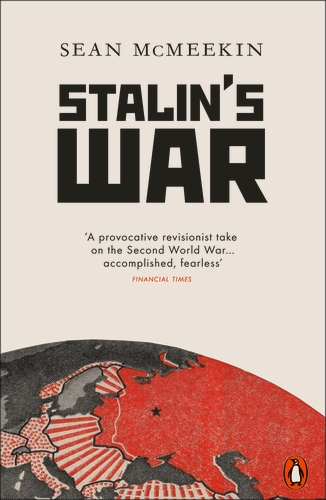 'A terrific read ... McMeekin is a superb writer' David Aaronovitch, The Times

'Impressive ... A new look at the conflict, which poses new questions and provides new and often unexpected answers to the old ones' Serhii Plokhy, The Guardian

In this remarkable, ground-breaking new book Sean McMeekin marks a generational shift in our view of Stalin as an ally in the Second World War. Stalin's only difference from Hitler, he argues, was that he was a successful murderous predator. With Hitler dead and the Third Reich in ruins, Stalin created an immense new Communist empire. Among his holdings were Czechoslovakia and Poland, the fates of which had first set the West against the Nazis and, of course, China and North Korea, the ramifications of which we still live with today.

Until Barbarossa wrought a public relations miracle, turning him into a plucky ally of the West, Stalin had murdered millions, subverted every norm of international behaviour, invaded as many countries as Hitler had, and taken great swathes of territory he would continue to keep. In the larger sense the global conflict grew out of not only German and Japanese aggression but Stalin's manoeuvrings, orchestrated to provoke wars of attrition between the capitalist powers in Europe and in Asia. Throughout the war Stalin chose to do only what would benefit his own regime, not even aiding in the effort against Japan until the conflict's last weeks. Above all, Stalin's War uncovers the shocking details of how the US government (to the detriment of itself and its other allies) fuelled Stalin's war machine, blindly agreeing to every Soviet demand, right down to agents supplying details of the atomic bomb.