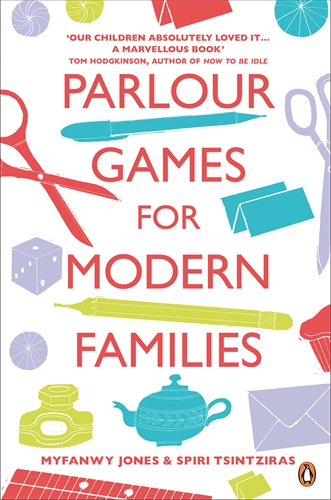 'Remember when you played cards or knucklebones or noughts and crosses? Or what about charades, murder in the dark, I spy or hide and seek? Or made chatterboxes, those devices made from a square of paper that you flipped open between thumbs and forefingers with wishes and dreams under the flaps. This book has the lot. It may even ween you off the telly. Remember blind man's buff? What about conversations, in which players discuss a topic by starting each sentence with a consecutive letter of the alphabet?

Written by two young mums, Parlour Games for Modern Families sets out to revive the tradition of indoor family games.This book is bursting with games of logic and memory, wordplay, card games, role-play, and rough and tumble. No game requires any equipment beyond a pack of cards, a dictionary, dice, paper, and pen. Games are organised thematically and referenced for age-appropriateness. All are set out with clear rules and instructions. There are games that will challenge and stimulate you, and games that will have you in fits; games that can last all night, and games to fill that empty half-hour before tea; games for adults and older children, and games to keep all the kids at a four-year-old's birthday party happy. Every family and every home needs a copy.

I was expecting to meet with a wall of resistance from our computerised children. But far from it: they all eagerly threw themselves into the game, and absolutely loved it ... It was the same with all the games we have tried from this marvellous book' - Tom Hodgkinson, Guardian

Myfanwy Jones and Spiri Tsintziras were sitting in a Melbourne park one day, watching their children play when they started reminiscing about the games from their own childhood and the idea for this book was born. With 4 children and 20 nephews and nieces between them to test all these games out, they've spent a hilarious couple of years gathering the material and writing this book. In their time not spent playing games, both are journalists and writers.