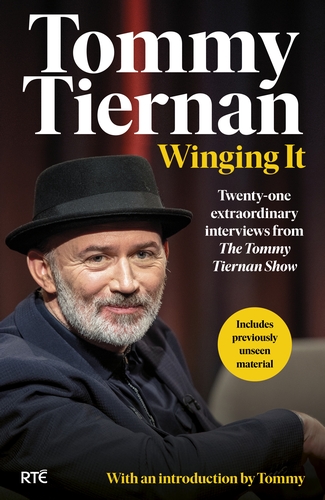 In nearly three decades as a performer, Tommy Tiernan has never wanted to play it safe. So, when it came to doing a chat show, he threw out the rule book: going in blind, not knowing who would turn up.

It could be a global star, like Adam Clayton, or a statesman like Michael D Higgins, or someone unknown to Tommy (and most of his audience), like autism awareness activist, Ciara-Beth Ni Ghriofa or geneticist Aoife McLysaght. It's high-wire stuff and makes for electrifying viewing. Winging It brings together twenty-one extraordinary interviews from The Tommy Tiernan Show on RTÉ One - a mix of the profound, the profane, the funny and the moving.

Tommy's belief in honest conversation is at the heart of Winging It. Whether getting to grips with the finer points of boxing with World Champion Kellie Harrington or preserving history with archivist Catriona Crowe. Or talking God with old friend Michael Harding or mental health with Blindboy Boatclub. Or sitting with moments of pain in conversations about grief (Bob Geldof), FGM (Ifrah Ahmed) or drinking (Paul McGrath). It's all about curiosity, bravery and a willingness to listen.

Winging It includes material that did not make the TV screen and the interviews are as gripping to read as they were to watch.

'Tiernan is superb at forming a rapport ... Seeing his words written down, reveals a natural instinct for drawing people out' Business Post