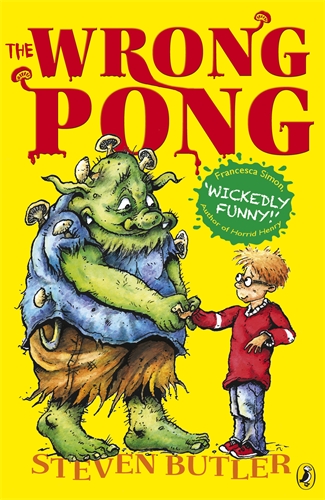 The Wrong Pong by Steven Butler is a laugh-out-loud, stinky story for 5+ girls and boys.

One night, Neville Brisket wakes up from a strange dream - a dream that there is a horrible, stumpy finger stuck up his nose. Then he finds his room in a mess, and his dog in the laundry basket.

Neville's investigations end sposhily, when he is whooshed down the toilet to the land of Under! In a case of mistaken troll-dentity, he finds himself part of a disgusting new family. Will anybody help Neville get back to Over, or will he be stuck eating rat patties and left sock stew forever?

This hilariously delivered tale will delight and disgust parents and children alike. Perfect for fans of Roald Dahl and Horrid Henry.

'A triumphant debut which will have children clutching the loo-seat in apprehension and laughter' - Amanda Craig, The Times


Steven Butler is an actor, dancer and trained circus performer as well as a keen observer of trolls and their disgusting habits. He has starred in Peter Pan, Joseph and the Amazing Technicolor Dreamcoat, and as Henry in Horrid Henry Live and Horrid! His primary school headmaster was fantastically funny author Jeremy Strong.