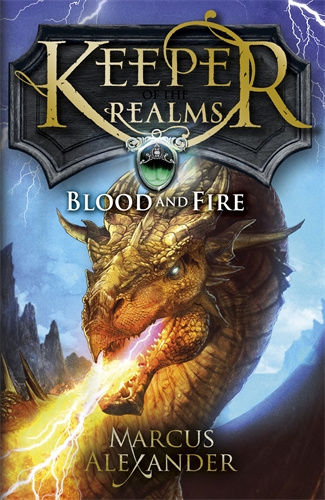 Keeper of the Realms: Blood and Fire (Book 3)

The final book in this fun fantasy adventure series, Keeper of the Realms - Lemony Snicket meets The Wizard of Oz!

Charlie Keeper went to sleep thinking the battle was over. She should have known better.

The mighty dragons, known as the Winged Ones, are trapped outside Bellania. Guarded by the barbaric Stomen they cannot return - leaving the ruthless Lord Bane free to rampage across the mystical realm.

Only a lost pendant can free them and only Charlie Keeper can find it. But time is running out and Bane's army of monstrous creations grows more deadly by the day . . .

The odds are stacked against Bellania's youngest keeper. Could the next battle be her last?

** A contemporary fantasy adventure for 10+ with elements of The Wizard of Oz, Lemony Snicket and The Lion, the Witch and the Wardrobe.
** Perfect for fans of Tolkien's The Hobbit and Paul Stewart and Chris Riddell's The Edge Chronicles.
** 'I would rather read Crow's Revenge than Harry Potter!' - Michael B, Year 7

About the author:
After several incident-filled years of travelling the world Marcus Alexander decided to pack in all serious attempts at reaching maturity and instead embraced the much more suitable world of parchment scribbling for a living. Marcus has a fondness for causing mischief, knows how to run really, really fast when he's in trouble and knows how to duck out of sight when someone points the long, bony finger of blame. Find out more about him and Charlie's adventures at www.keeperoftherealms.com