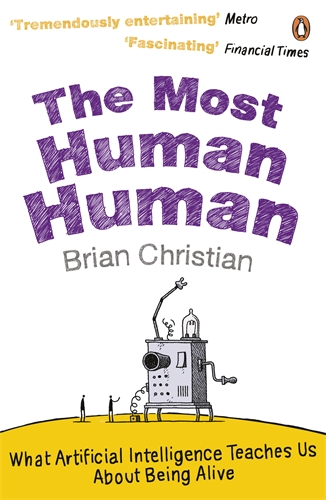 The Most Human Human

What Artificial Intelligence Teaches Us About Being Alive

The Most Human Human by Brian Christian is a mind-blowing piece of reportage that will appeal to readers of Jon Ronson's The Psychopath Test, and an inspiring riposte to John Gray's classic Straw Dogs - a book that will change your whole understanding of what being human actually means...

Telling the difference between humans and computers used to be easy. But artificial intelligence is now so advanced that it is capable of behaving, and even thinking, in ways that have long been considered exclusive to humankind. The time has come to rethink what being human actually means...

In The Most Human Human Brian Christian meets the world's leading artificial intelligences, finds out what they're capable of - and what makes us unique. The result is a funny, shocking, inspiring, deeply humane and intelligent book that reaches into every aspect of our lives.

'Excellent ... a fascinating explanation of what it means to be human'Financial Times

'Remarkable. A philosophical joyride. The day that a machine creates work of such wit and originality, we should all be very worried'The Times

'An epic tour of philosophical, linguistic and scientific discovery. We stop off in places as far-flung as existential anxiety, predictive text and Gary Kasparov's defeat by Deep Blue' ****Time Out

At the age of twenty-six, Brian Christian has lectured at the LSE, Royal Academy, Bristol Festival of Ideas, Microsoft and Google, been interviewed on The Daily Show, BBC and in the Paris Review, profiled in the Guardian, featured in The New York Times, the New Yorker and on the front cover of Atlantic, and has made numerous appearances at universities and in online videos speaking on his subject. He holds a dual degree from Brown University in computer science and philosophy, and an MFA in poetry.