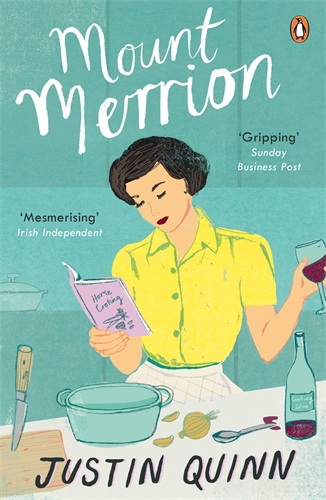 Justin Quinn's Mount Merrion: a gripping family story spanning half a century, in the mould of Jonathan Franzen and John Lanchester.

Declan and Sinead Boyle are pillars of society - born into prosperous families, educated at Dublin's finest schools, dwellers in a fine house in a leafy suburb. So why are they in so much trouble?

Declan wants to serve his country - but he also wants to serve his own ambition. Sinead wonders if she is allowed, in the Ireland of the sixties and seventies, to have ambitions at all. Their son, Owen, seems intent on squandering the advantages of a prosperous upbringing and an expensive education. Their daughter Issie, gifted and attractive, has all the options in the world - and keeps choosing the wrong one.

Mount Merrion, the dazzling debut novel by Justin Quinn, tells the story of the Boyles from Declan and Sinead's first meeting, in the late fifties, through decades of success, failure and tragedy. Set against the brilliantly realized backdrop of a changing Ireland, it is a page-turning drama, a biting satire and a lovingly detailed portrait of a marriage and a family.

'Imaginative and compassionate ... Mount Merrion is about how a decent man, anxious to play by the rules - even if they're someone else's rules - can make the sort of choices that may end up ruining him' Mail on Sunday (four stars)

'Taking the form of a family saga, [Quinn's] assured debut plays out over half a century - a state-of-the-nation novel as told through the fast-changing fortunes of middle-class married life ... his novel is filled with perfectly judged moments' Independent

'Mesmerising ... The story is a page-turner, and Quinn's prose consistently light and controlled' Irish Independent

'A book that people will find hard to put down ... a gripping story' Sunday Business Post

'A great story ... both beautifully written and a well-paced page-turner' Irish Times

'Justin Quinn's debut novel is poignant - but it is also fiercely and poetically written, a beautifully observed trajectory of the rise and fall of a society and its assumptions, through the medium of a family story ... This is one of the best books of the year' Evening Herald

'Accomplished ... as a condition-of-Ireland novel it makes for salutary reading' TLS