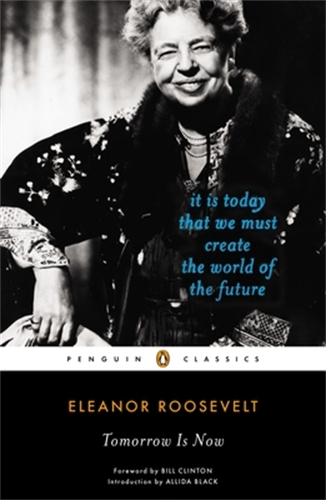 As relevant and influential now as it was when first published in 1963, Tomorrow Is Now is Eleanor Roosevelt's manifesto and her final effort to move America toward the community she hoped it would become. In bold, blunt prose, one of the greatest First Ladies of American history traces her country's struggle to embrace democracy and presents her declaration against fear, timidity, complacency, and national arrogance. An open, unrestrained look into her mind and heart as well as a clarion call to action, Tomorrow Is Now is the work Eleanor Roosevelt willed herself to stay alive to finish writing. For this edition, former U.S. President Bill Clinton contributes a new foreword and Roosevelt historian Allida Black provides an authoritative introduction focusing on Eleanor Roosevelt's diplomatic career.

Eleanor Roosevelt (1884-1962) was First Lady from 1933 to 1945. She was a significant advocate both for the New Deal and for civil rights and a strong supporter of the formation of the United Nations. She was a delegate to the UN General Assembly from 1945 to 1952 and chaired the committee that drafted the Universal Declaration of Human Rights. In the last decade of her life she was particularly active in promoting women's rights. Tomorrow Is Now was published shortly after her death.