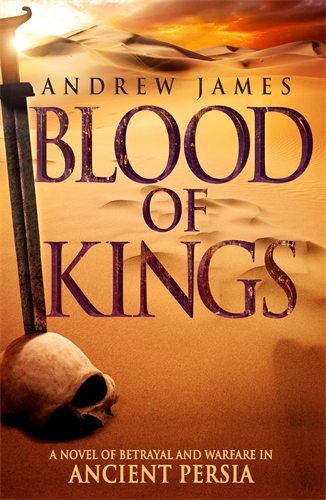 Praise for Blood of Kings:

'Extremely compelling..... an almost Game of Thrones feel at times. The novel is certainly a page-turner...I look forward to reading a continuation' Ancient Warfare Magazine

'This is a brilliantly written and scrupulously researched historical novel that uniquely captures the atmosphere surrounding the rise to power of Darius, the greatest king of Ancient Persia. His story is interwoven with parallel events in Egypt and Greece, making this novel of absorbing interest to anybody with an interest in the ancient world' Dr John Curtis, OBE, FBA, formerly Keeper of the Department of Middle East, the British Museum

It is 530 BC and Cyrus the Great has carved out the largest Empire the world had ever seen, making Persia the undisputed superpower of the ancient world. But there is treachery afoot, and Cyrus's life is in danger.

In a fast paced tale of love, war, betrayal and revenge, Blood of Kings sweeps the reader up on an epic journey from the mud brick cities of Ancient Persia to the burning heart of Pharaoh's Egypt. Packed full of dramatic and authentic battle scenes, it recreates the sweat, blood and fear of ancient warfare, as Persia smashes Egypt's army and brings the reign of the Pharaohs to a violent end.

But it is also a book that will delight Herodotus fans, bringing the ancient Greek historian's characters to life like never before, as it follows the doomed 'lost army of Cambyses' into the Libyan Desert, marching towards a fate that would baffle archaeologists for millennia to come.

'Andrew James has captured the very spirit of the Ancient Achaemenids . . . he literally takes the reader back in time to the Persians of old. I would highly recommend this historical novel . . .' Dr Kaveh Farrokh, Lecturer and Reader of History at the University of British Columbia Continuing Studies Division