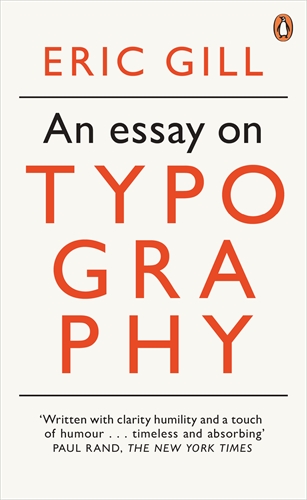 An Essay on Typography

Eric Gill's opinionated manifesto on typography argues that 'a good piece of lettering is as beautiful a thing to see as any sculpture or painted picture'. This essay explores the place of typography in culture and is also a moral treatise celebrating the role of craftsmanship in an industrial age. Gill, a sculptor, engraver, printmaker and creator of many classic typefaces that can be seen around us today, fused art, history and polemic in a visionary work which has been hugely influential on modern graphic design.

'Written with clarity, humility and a touch of humour . . . timeless and absorbing' Paul Rand, The New York Times

'His lettering was clear, confident and hugely influential on the development of modern type design. The world has now caught up with Gill' Guardian

How do we see the world around us? This is one of a number of pivotal works by creative thinkers like John Berger and Susan Sontag whose writings on art, design and the media have changed our vision for ever.