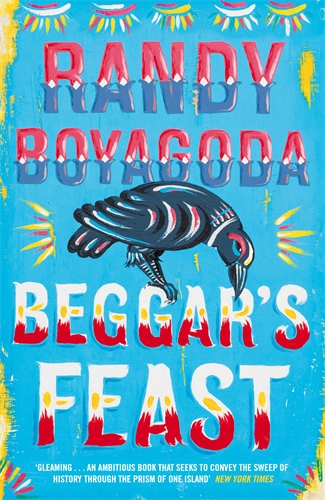 *NOMINATED FOR THE DUBLIN LITERARY PRIZE*

Randy Boyagoda's Beggar's Feast is a tour de force of a novel set in Sri Lanka about a man living in defiance of fate.


'Gleaming . . . An ambitious book that seeks to convey the sweep of history through the prism of one island' Sara Wheeler, New York Times


Sam Kandy, born in a poor village and abandoned by his family ten years later at a remote temple, resolves to make his own luck amongst the cheats and chancers of the world.

He returns to his birth village as a steely self-made man. He marries a nobleman's daughter and coldly pursues a life of wealth, prestige, and power.

And so begins a devastating chain of events...


Beggar's Feast is a masterpiece - a raw, profound and magnificent novel about origins and endings, about what we forsake to survive.

'Ambitious . . . a narrative that spans the whole of the last century', Financial Times

'A brilliant book. This novel reminds us of the values we are taught as children but which we might forget as we enter adulthood' Nadeem Aslam, author of The Blind Man's Garden

Randy Boyagoda's first novel, Governor of the Northern Province, was nominated for the ScotiaBank Giller Prize in 2006. He has written for a variety of publications, including The New York Times, The Wall Street Journal, The Paris Review, and Harper's Magazine. He lives in Toronto with his wife and four daughters.