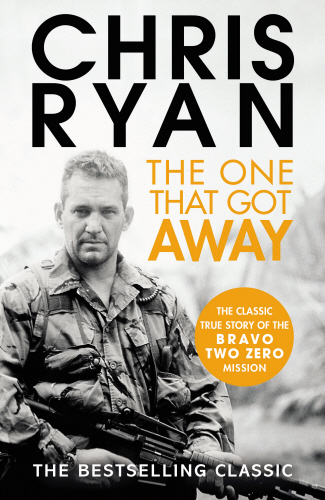 The One That Got Away

Eight members of the SAS set off on the mission. Only one evaded capture.
This is his true story.

The SAS mission conducted behind Iraqi lines is one of the most famous true stories of courage and survival in modern warfare. Late on the evening of 24 January 1991, the patrol was compromised deep behind enemy lines in Iraq. A fierce firefight left the eight men miraculously unscathed, but they were forced to run for their lives.

Their aim was to reach the Syrian border, 120 kilometres to the north-west, but during the first night the patrol accidentally broke into two groups of five and three. Chris Ryan found himself left with two companions. Nothing had prepared them for the vicious cold of the desert winter, and after a blizzard and a desperate search for food, Chris Ryan found himself the last man standing.

Left on his own, Ryan narrowly escaped an Iraqi attack and set out alone, trying to reach the border through some of the most lethal country in the world. This is the story of courage under fire, of skin-of-the-teeth escapes, of the best trained soldiers in the world fighting against adverse conditions, and of one man's courageous refusal to lie down and die.