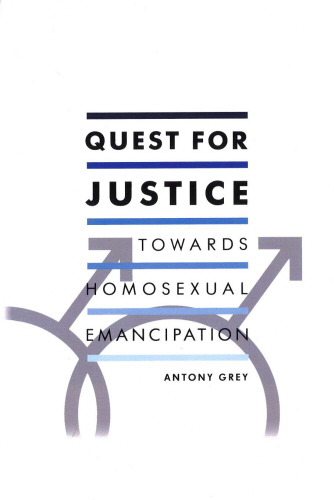 Quest for Justice: Towards Homosexual Emancipation

In 1967, after a ten-year campaign, the laws which treated all homosexual acts between males as crimes in England and Wales were altered to permit such behavior between two consenting men aged over twenty-one in private. Twenty-five years on, the profound significance of that change, and the nature of the struggle that was waged to achieve it, are not always fully appreciated. Gay people and their lifestyles are still the subjects of considerable controversy and entrenched prejudice, and today's gay rights campaigners are justified in believing that many more sweeping changes in legal and social attitudes are now called for.

Quest for Justice is the inside story of the battle for the Wolfenden reforms, told by one of its main protagonists. Antony Grey was Secretary of the Homosexual Law Reform Society during much of the campaign and for some time afterwards. Here, besides giving his personal account of the reform campaign, he comments on the subsequent course of the developing movement for gay rights, and his own not always entirely harmonious relations with it. He also describes the rising power of the 'moral majority' backlash, and its bitter attacks upon the liberalisers whom it miscalled 'permissive'.

Whilst expressing disappointment at the slow progress of human sexual rights during recent years, and a sense of ever greater urgency, with the advent of AIDS, for the widespread acceptance of much more frank and realistic attitudes, Antony Grey concludes on a hopeful note, foreseeing a sexually saner twenty-first century in which updated moral, social and legal attitudes will combine to promote, rather than hinder, human happiness.